Immortal Progeny releases this very Friday! It is available for ebook pre-order right now. Print editions will be available next week, and as you can see I am working on the audiobook right now.

It’s a book that I have wanted to write since I finished Harbinger, the last book in the Books of the Order series.

That was a world where religion had been largely thrown away, and replaced with a healthy fear of the supernatural. Those that still did have faith, were largely ignored or laughed at.

So I wanted to write a book that delved into religion, and most especially fanaticism. If the world of Geist was sure of paranormal creatures, then the world of Immortal Progeny is sure of gods. They have evidence. They have seen them come from the God Void.

Temples of many gods war among themselves for the right to be called The One True God. It is a war that has killed and displace many. The monstrous creatures that the temples create to fight their wars, ravage the countryside.

In small free villages, atheist magicians, train with their magic, but are often the fodder for the temples wrath.

Until one day three sisters appear from the void where the gods are born. They don’t seem like gods, they are fragile and need help and shelter. What they are given instead will mould them and change the direction of the wars raging around them.

To give you all a taste of the world, I am releasing the first chapter of the novel for your listening pleasure. Keep an eye out for more release day events and competitions this Friday!

Immortal Progeny is my next novel, coming in March 24th, and you can pre-order now.

It was a novel I wanted to write after doing the Books of the Order. The world of Sorcha, Merrick and Raed was a largely godless one. The gods had been proven not to exist there, but I wanted to explore more deeply the role of the divine. What people do with it. How they twist it. The damage and the good it can do.

So The Fragile Gods series leapt to life. Immortal Progeny is the first in three books set in this world of warring temples and towering monsters.

For generations the world of Rahvas has been awash in holy war between its many temples.

Separated, Rowan, Vervain and Amaranth have lived out very different lives. One lived as a temple acolyte, another as meat for the creation of progeny, while the third learns the magic of the atheists.

As the sisters’ power unfolds and they learn the truth of who they are, the temples and all those that fight for them will find a new war on their doorstep. Rahvas will become the battleground between gods and monsters.

And here is the cover, by Designed by Starla. Look for the ebook, print and audiobook in March. 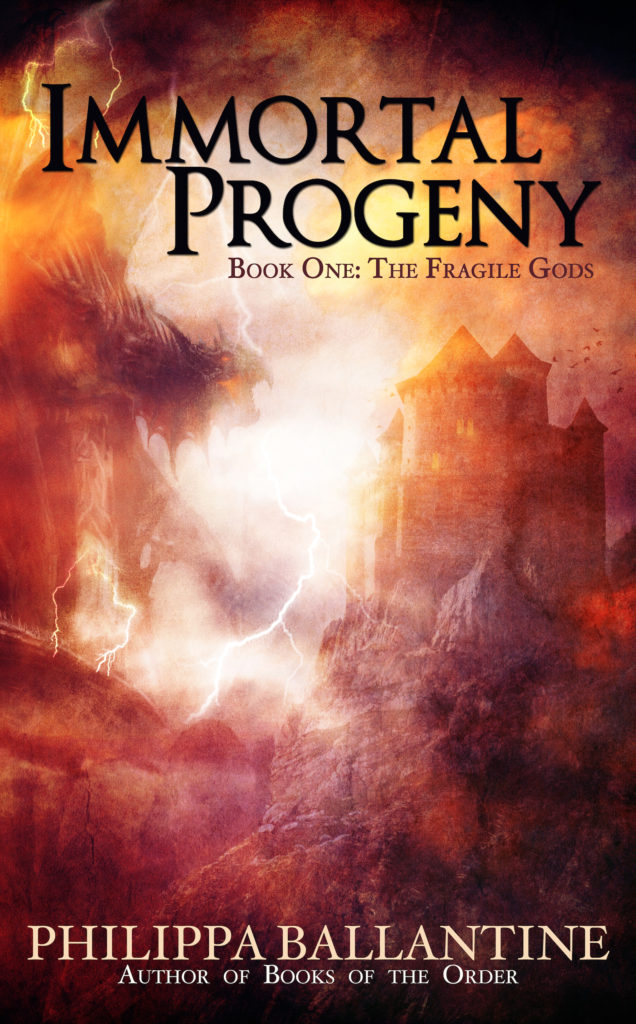